Gdynia WaterFront is a modern, multi-functional complex to be run by the SwedeCenter company, which will be built by the President’s Wharf where the city meets the water. Ultimately, the complex will offer 90,000 square meters of surface area which will include offices, retail developments, services centres, residential buildings, a hotel as well as cultural and recreational facilities. The first stage of the Gdynia WaterFront investment includes the construction of the Mariott Courtyard hotel with a conference centre and 11-storey office building, which has been leased in its entirety by PKO Bank Polski. The complex will be built between the Sea Towers and the Kościuszki Square, directly next to the wharf at the President’s Basin. The office block will provide an area of over 10,000 square meters which is to be leased as well as cafes and restaurants situated on the ground floor. The hotel managed by Scandinavian Hospitality Management will offer 201 rooms, the conference centre with a surface area of 650 square meters as well as a sea view restaurant situated on the ground floor. The work connected with the first stage of the investment is planned to be completed by the middle of 2015. 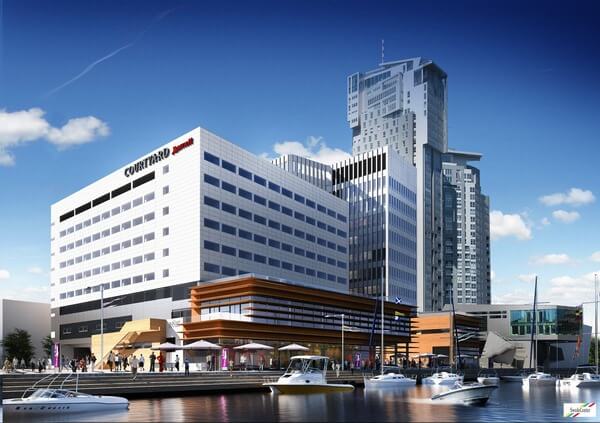